View of the Masonic Hall as seen from Duncombe Place, York.

Duncombe Place Masonic Hall was built in 1862-63, with further alterations undertaken in 1866.

The building is now a Grade 2 listed building within the conservation area in the heart of the City of York, and can be found in the corner of Duncombe Place, behind the War Memorial, within sight of the Dean Court Hotel, and with stunning views of York Minster.

The Foundation Stone was laid in the North East corner of the Lodge Room by the Worshipful Master, William Lawton, on the 8th September 1862, into which was placed a jar containing copies of the Book of Constitutions, the Yorkshire Gazette, the York Herald and the By Laws of the Lodge, together with several current coins of the realm, an inscription on parchment, and a list of the members of the Lodge.

The Lodge building was duly completed and an Extraordinary Lodge was called on the 2nd June 1863 for the ceremony of Opening and Consecrating, which 60 members attended.

Alterations to the Lodge building were undertaken in 1866, at which time the front elevation was taken down and rebuilt 12 feet further forward. This allowed the extension of the Banqueting Room on the first floor, the addition of a Stewards room, and increased the sizes of the ground floor rooms. In addition, the original winding staircase was replaced with the current square staircase, and the original porch way entrance was moved to its current position. Its original position was where the central Library window is now located, and these alterations can still be clearly seen.

The building was further extended in 1931 and completed in 1933 to provide officers for Provincial Grand Lodge and accommodation for a caretaker.

The building was transferred to the “Duncombe Place Masonic Hall Charitable Trust”, a registered charity in 1993 , whose aim is “To preserve for the benefit of the City of York and the nation at large the freehold property situate and known as the Masonic Hall, Duncombe Place, York”

Photo of John Edwin Oates, the Architect who designed the Lodge building.
Sketch of Lodge building shortly after completion, showing original position of the porch way entrance prior to alterations.

Translated as: “Hear, see, be silent, if you would live in peace.” 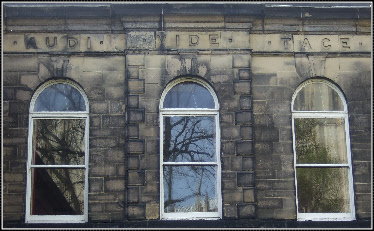